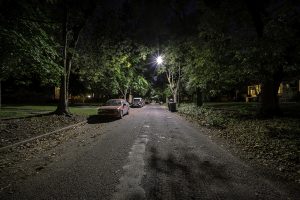 DETROIT – The relighting of Detroit – a city that just three years ago was in chronic darkness – has been completed on time and under budget.

The Public Lighting Authority (PLA) on Thursday installed the last of 65,000 new LED streetlights, completing a massive relighting program that began in February 2014 after Mayor Mike Duggan and Detroit City Council appointed a new board to lead the project. In 2013, the PLA, under its previous leadership, had installed only 500 new lights, which were of the older technology, sodium style.

“For the first time in a generation, Detroiters can step outside at night anywhere in their city and have an expectation of a street lit to the national standard,” Mayor Mike Duggan said. “They also can have the expectation that if a light goes out, it will be replaced within five days. This major accomplishment for our residents would not have been possible without the hard work of the professional staff and board we have at the PLA.”

Prior to the start of the LED project, about 40% of the city’s streetlights did not work, including entire neighborhoods in some cases. To bring relief to residents as quickly as possible, the Mayor worked with the PLA to reverse the original plan that called for lighting major thoroughfares first in order to light neighborhoods first and complete them a year earlier. The new plan also called for installing brighter and more energy-efficient LED lights, as opposed to the dimmer sodium lights.

The replacement of lights began in the city’s darkest ZIP codes on the far east and far west sides, and moved methodically across the city, eventually reaching the final destination: downtown Detroit. At a ceremony held at dusk just east of downtown at Atwater and Riopelle, Mayor Mike Duggan; President Obama’s budget director, Shaun Donovan; and other dignitaries joined with residents to turn on the last stretch of lights to be replaced in the city.

Dr. Lorna Thomas, chairwoman of the Public Lighting Authority, said Thursday’s celebration “is the culmination of three years of intense work that has brought order out of chaos with the city’s street lights and has created an effective solution to an issue that has plagued the city for decades. When we began installing new LED streetlights in Detroit’s neighborhoods in February 2014, many people thought what we were trying to do was impossible, because it had never been done. But we have done it. This an example of how government should work.”

“I’m proud of our staff and want to thank them for their dedication and long hours in relighting our city,” said Nicolette Carlone, CEO of the PLA. “Their hard work is recognized in completing this monumental project on schedule and under budget.”

Prior to the formation of the Public Lighting Authority, Detroit’s street lighting system had been in increasingly serious disrepair, with minimal infrastructure investment having been made for at least the last 20 years. Approximately 40 percent of the lights in the system were not working for reasons that included copper theft, bulb outages, vandalism, obsolete technology, lack of repair staff and a lack of funds to pay for repairs.

“The completion of this project is an amazing step in Detroit’s comeback. It’s events like these that prove that this city is on the path to recovery and will continue to become an even better place to live, raise a family, and do business,” Gov. Rick Snyder said.

DTE Energy has served as the owner’s representative overseeing the project from its beginning to completion.

“At DTE Energy, we are extremely proud to have assisted with the project to relight the City of Detroit,” said Trevor F. Lauer, president and chief operating officer, DTE Electric. “For our residents, businesses, employees, and the surrounding communities, Detroit’s new energy efficient streetlights symbolize progress, safety, and a tremendous sense of pride in our invigorated and revitalized city.”

The Public Lighting Authority was authorized at the state level by legislation that passed the Legislature and was signed into law by Gov. Rick Snyder. The Detroit City Council approved the PLA’s articles of incorporation in February 2013. The authority was created to develop and implement a plan to get the street lighting system operating effectively and to provide a vehicle to secure the funds to make the badly needed improvements to Detroit’s public lighting system.

The PLA has eliminated the problem the old system experienced of copper theft by switching from copper to aluminum wiring. Aluminum has only a small fraction of the value of copper on the scrap market, making it unattractive to potential thieves. The new LED lights also do not require a copper coil at the base, as the old lights did, removing another target of thieves.

In another measure to improve reliability, the PLA has done away with the city’s old series-circuit lighting system, commonly known as “Christmas tree light” wiring, in which multiple lights were on one circuit – so if one light burned out, all the lights on that circuit would stop working. In the new lighting system, if one light goes out, the others stay on.

In addition, the authority has instituted a maintenance program that fixes lights that have ceased working within three to five days of the outage being reported. Under the old system, residents could wait months, if not years, for a street light to be repaired if it went out.

“When the State of Michigan and the Public Lighting Authority came to us three years ago to help get the street lights turned back on in Detroit, we were happy to step up,” said Michael Corbat, Chief Executive Officer of Citi. “Today, not only are the city’s streets safer, but the lights will stay on longer and use less energy. We’re honored to have played such a role in creating a brighter future for Detroit.”‎

The PLA is run by a five member board, all of whom are Detroit residents. Detroit Mayor Mike Duggan and the Detroit City Council each appoint two board members, and the fifth member is picked by Council from a list of candidates provided by the Mayor.